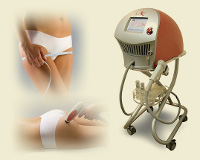 Energy of radio waves (radiofrequency, RF) is a type of electromagnetic radiation with wavelengths of frequencies from 300 GHz to 3 kHz. Radio waves stimulate the skin, causing thermal effect, similar to the effect of laser or IPL performance. Unlike laser, which induces heat in a selected chromophore, non-ablative RF devices transmit radio frequency energy into deeper layers of the skin, which leads to strong dermal heating. The high temperature causes that the collagen fibres shrink. The skin cells (fibroblasts) are stimulated to the production and regeneration of collagen. Significant increase of temperature in a tissue, caused by radio waves, results mainly from the configuration of electrodes - unipolar (deep dermal heating) and bipolar (superficial heating). Apart from the possibility to control deposition of RF energy into superficial or deeper layers of the skin, the RF technology (uni and bipolar) stimulates the production and remodelling of collagen, which, in consequence, gives the effect of firmer and elastic skin.

Most of the RF devices which are available on the market, function with one electrode and have low range of frequencies, and so they work more slowly and require intensive cooling or earlier anaesthesia for patients. Accent system (Alma Lasers, Israel) is a new release among the RF devices. It uses two individual types of electrodes: unipolar, penetrating further for deep dermal thermotherapy, and bipolar, focusing on the surface layer of the skin, with precisely pre-set depth of penetration. The device operates with the highest available frequency of 40.68 MHz (with an average frequency of 6-10 MHz), which significantly streamlines and accelerates the work of the practitioner. The system does not require extensive cooling or local anaesthesia for patients. Patients describe the procedure as virtually pain-free. The first effects are achieved after 4-6 weeks. A major improvement in the skin occurs gradually over 3-5 months after surgery. The therapy involves 4-6 treatments every 2-4 weeks.

The therapeutic procedures are suitable for both facial and body treatments. Effects of radio waves on the tissue allow for a non-invasive improvement of skin elasticity, correction of the oval of the face, lifting of a sagging chin, reduction of wrinkles and local fatty tissue, drastic elimination of flabby skin around the arms, abdomen, buttocks and Thighss, as well as treatment of severe forms of cellulite.