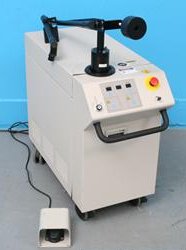 Laser Medlite Q-switch Nd:Yag (Hoya Conbio, USA) removes tattoo by emission of very short light impulses (nanoseconds), which are selectively absorbed by the pigment of the tattoo. Each pigment colour absorbs different wavelength. After absorption, the tattoo ink is broken into very tiny ink particles, which are then eliminated by the skin immune system. In this way, the treatment is very precise and does not cause any damage to the skin.

Not all ink colours can be removed. Laser has some limitations when it comes to removing yellow, purple, orange, pink and white tattoos. With Laser Medlite system, it is possible to remove professional, amateur and post-traumatic tattoos.

The treatment is proceeded by a medical consultation with a skin testing, qualifying for the treatment. The feelings during the treatment with the laser can be compared to the pain of being gently snapped with a rubber band against the skin, so the anaesthetisation is usually not required. After the treatment, patients experience delicate, surface and fast healing epidermis damages. Before leaving the clinic, patients have an antiseptic ointment and dressing placed on the treated skin. After several days, the scabs, which had earlier appeared on the target area, fall off, revealing the reddened cuticle. Overtime, with each session, the tattoo fades, but sometimes, a small amount of ink may remain in the skin and the shape of a tattoo might be still visible.
There is a very low risk of scarring, except for premature picking scabs and potential infection (rarely). Nearly after each tattoo removal session, there are temporal discolouration, depigmentations and changes in the skin's texture in the treated area. In most cases, they subside within 1-3 years after the treatment. In rare cases, there occur permanent changes, which are usually delicate and barely visible and thus accepted by patients.

Removal of a tattoo during a single session is usually impossible. The number of needed treatments depends on:

Amateur tattoos usually need 4-5 treatments for total or 90% removal. While professional tattoos, which usually have very dense and strong pigments, require about 6-8 treatments. Between treatments, there should be a 6-8 week interval, during which the body absorbs the broken particles of the ink, which can be observed as the tattoo gradually fades. Duration of a single session depends on the size of the tattoo and may last from 5 to 60 minutes.

*Copying and spreading of the photos without the consent of the owner is prohibited!

1) laser CO2: removing of tattoo by evaporation with laser light beam - depending on the depth and size of the tattoo design, the treatment may be performed with the use of different laser operating modes (ultrapulse laser, normal pulsed laser, super pulsed laser). The laser vaporizes skin cells damaged at the surface-level. After vaporization, the treated area scabs. Healing of the treated area by epithelialisation lasts about 1-2 months. The CO2 laser tattoo removal always results in transformation of the tattoo into a scar,

2) IPL: the mechanism of action involves heating of the pigment into a very high temperature, which results in the destruction of a cell containing the pigment. The treatment results in a uniform and dry scab, which peels of within 1-2 months. Currently, the method is not very popular, due to its little effectiveness in relation to the risk of complications (mainly hypertrophic scars),

3) surgical excision - usually concerns small tattoos, localised in the areas of a little skin tension. It is rather a single-time treatment which leaves a small scar. Bigger tattoos, which are in the areas of a bigger skin tension (back, shoulders) can be removed with the use of a tissue expander. A tissue expander is a kind of implant placed under the skin, causing its expansion. After a few months, the expander is removed from the tissue while the excess skin (with the unwanted tattoo) is cut out.
The treatments involving tissue expanders are performed by plastic surgeons;