Invasive laser lipolysis is also called small volume liposuction.
Laser lipolysis is a method of silhouette shaping, which at one time allows for local body slimming and performance of skin thermolift. It employs the effect of laser activity, which allows for precise shaping of face and body contours. While reducing the excessive adipose tissue, there is no effect of skin flabbiness, as the laser promotes skin contraction and lifting in the treated areas.

Due to very thick optical fibres (400-600 mimicrometres), inserted with blunt-tipped cannula of 1mm diameter and 10-20 mm length, the laser allows for the performance of a minimally invasive treatment, with local anaesthesia. Additional advantage of lipolysis with laser Velas 60 is improvement of skin elasticity by warming the collagen fibres, far less destruction than in traditional methods and minor or none discomfort after the procedure.

Indications for laser lipolysis is reduction of fatty tissue in the following body areas:

Laser lipolysis may be performed in people with excess weight of between ten and twenty kilo at most. As it is not a slimming method, but a silhouette sculpting method, the amount of adipose tissue, which is removed, is only just the amount that is excessive in a given body area - typically, up to 2 litres.

The treatment is for everybody who wants to effectively get rid of locally accumulated fatty tissue. The method is especially dedicated to those who are a little overweight and want to remove stubborn pockets of fat from target body areas, which are difficult to reduce applying other methods.

Recommendations before the treatment:

*Copying and spreading of the photos without the consent of the owner is prohibited!

- bruising - usually subsides after about 2-3 weeks,
- pain - may last up to a few days or longer, it is recommended to use pain-killers (paracetamol, ibuprofen, etc.),
- swelling - may last for a few weeks;

- problems with healing of the skin incisions,
- irregular body contours (swellings, skin defects, nodes) - the changes usually regress within 10 weeks, they are rarely permanent,
- burns,
- blood clots,
- accumulation of serous fluid,
- paresthesia - loss of feeling or increased sensitivity to pain, lasting for several weeks,
- in case of major skin flaccidity, after the procedure, the expected effect of skin tightening may be not achieved.

Contact your doctor promptly if you notice any signs of complications after the treatment! 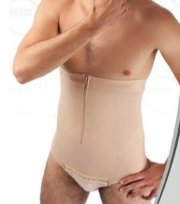 Recommendations after the procedure: