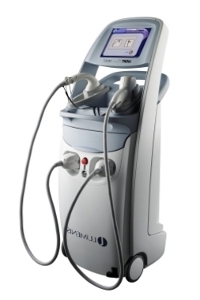 A 800 nm diode laser for laser hair removal, developed in 2009 as LightSheer Duet, by an American enterprise - Lumenis - the world’s largest and most diversified medical laser company. The company launched its first LightSheer laser in 1998. Since then, the laser has been subject to constant modifications and improvements of parameters; the producer introduced several models into the market: ST, ET, EP, XC. The modifications concerned mainly increasing the density of energy (with first lasers it was maximally 40J/cm2, the latest generate the energy of 100J/cm2), but also the frequency has been changed - the newest models operate at a frequency up to 3 Hz, which significantly shortens the treatment duration. Moreover, Lumenis has been constantly improving the parameter of a single pulse duration: from 30 ms up to 400 ms, which enables treatments of darker or tanned skins. Finally, in the older models, the laser spot was enlarged from 9x9mm to 12x12mm.
The newest model of LightSheer - Duet is an integration of the best parameters from the "old" handpiece with the entirely new - large handpiece intended for the treatment of bigger body areas.

The LightSheer Duet system is equipped with two unique treatment handpieces, emitting laser light with a wavelength of 800 nm and a very effective, maximum output power of 600 W with selectable pulse duration of 30, 100 and 400 ms, which gives the possibility to perform safe treatments in patients with dark or tanned skin.

- synthetic sapphire treatment window of 9x9mm,
- pulse of regulated energy density up to 100J/cm2,
- highly effective and precise hair removal from any part of the body,
- patented contact-cooling hand piece, the ChillTip, prevents skin burns during the delivery of laser energy, which lowers the risk of complications (less than 0,1%);

- innovative combination of a large treatment area of 22x35 mm with a vacuum pressure,
- very fast, effective and painless hair removal of large body areas, such as legs, back or torso,
- much larger spot size enables greater depth of laser light penetration, while vacuuming the treated skin into the handpiece improves the absorption of energy, which enables effective hair removal at lower energy levels: 4,5 - 12J/cm2,
- handpiece does not require cooling,
- the vacuum pressure makes the treatment painless,
- the number of pulses required for hair removal of a given body area is 10 times lower in comparison to a traditional treatment, which dramatically shortens the duration of a single treatment. For example, laser hair removal on the legs, with the new handpiece, lasts only just 15 minutes, while previously, it was 3-4 hours,
- thanks to high-speed of the treatment, the procedure is not tedious neither for the patients nor for the practitioner,
- comfort and safety of the system management,
- the handpiece is a real breakthrough in the field of laser hair removal.

LightSheer Duet is nowadays the most powerful of all available laser hair removal systems, which enables reduction in the number of therapeutic sessions and assures effectiveness incomparable with other systems.

LightSheer laser is intended for the treatment of unwanted hair, especially in the following cases:
- hirsutism or hypertrichosis,
- inflammation of hair follicles, especially after shaving,
- ingrown hair,
- "spider veins" on legs, when waxing is not recommended;

The laser is FDA and CE approved, which guarantees safety and effectiveness of performed treatments.